Russia's change of Iranology objectives to be considered

Publish Date : Sunday 2 February 2020 - 15:17
IBNA- The meeting, "A Consideration of Changes in Objectives and Approaches in ‎Iranology from Tsarist Russia to the Soviet Union" will be held on Tuesaday with ‎Russian scholar Denis Volkov in attendance. ‎ 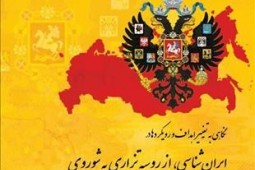 According to IBNA correspondent, the program is held at Faculty of Literature and Humanities of Tehran University in cooperation with Iran's Book House Institute.

Denis V. Volkov a winner of the 27th I.R. Iran's Book of the Year World Award ‎‎and Iranian expert Goudarz Rashtiani will make speech at the meeting, "A Consideration of Changes in Objectives and Approaches in Iranology from Tsarist Russia to the Soviet Union".

Volkov is Assistant Professor in Middle Eastern History at the University of Manchester. He spent almost fifteen years in Iran, working in the field of interstate economic cooperation between Russia and Iran.

His research interests include the history and the present of Russo-Iranian relations, Russia's Oriental studies, intellectual history, Russian and Iranian nationalism, and, particularly, Russian émigré Orientalists.

His most recent publications are 'Vladimir Minorsky (1877-1966) and the Iran-Iraq War (1980-8), or The Centenary of 'Minorsky's Frontier',' in Russians in Iran: Diplomacy and Power in Iran in the Qajar Era and Beyond, edited by Rudolph Matthee and Elena Andreeva (2018), and 'War and Peace in the Other and the Self: Iran through the eyes of Russian spies' in the journal Cahiers de Studia Iranica (2018). ‎