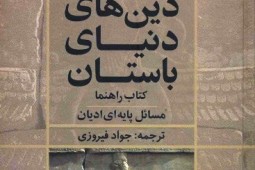 According to IBNA correspondent, the book has been translated into Persian by Javad Firouzi, a member of the Theology Faculty of Semnan University who has also authored the book ‘An Introduction to Religious Studies’.

'Ancient Religions' argues that religious beliefs and practices, which permeated all aspects of life in antiquity, traveled well-worn routes throughout the Mediterranean: itinerant charismatic practitioners journeying from place to place peddled their skills as healers, purifiers, cursers, and initiators; and vessels decorated with illustrations of myths traveled with them.

New gods encountered in foreign lands by merchants and conquerors were sometimes taken home to be adapted and adopted. This collection of essays by a distinguished international group of scholars, drawn from the groundbreaking reference work Religion in the Ancient World, offers an expansive, comparative perspective on this complex spiritual world.

Sarah Iles Johnston is primarily known for her contribution to Classics, and in particular her research into Ancient Greek beliefs about what happened after death and how the dead and the living could interact, magic, divination and myths. Especially in her later work, she includes comparisons between ancient Greek ideas and practices and those of other cultures, both Mediterranean and non-Mediterranean.

Johnston holds professorships in Ohio State's Departments of Classics and of Comparative Studies. She also was the founding director of the Center For the Study of Religion at Ohio State (2006–2010).

'Ancient Religions' in Persian has been released by Tamdon-e Elmi Publishing in 1062 pages.