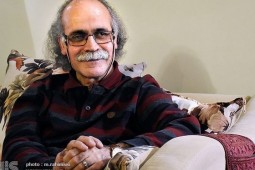 Farhad Hassanzadeh ‎
According to IBNA correspondent, Hassanzadeh will compete with five other nominees at International Board on Books for Young People (IBBY) 2020, a Swiss non-profit organization committed to bringing books and children together and the winner will be announced at Bologna Book Fair 2020.

Hasanzadeh has published more than 80 books for children and young adults, including novels, short stories, legends, fantasy, humour, biography and poetry. Some of his books have been translated into other languages, including English, Turkish, Malay and Chinese.

His writing often deals with the subject of war, and particularly its effect on civilians; it takes a pacifist, humanist stance. Other topics include migration, homelessness and life in shanty towns.

He has won many book awards, including several Iran's Book of the Year Awards. He was the Iranian nomination for the Astrid Lindgren Memorial Award in 2017 and 2018. He was a runner-up in the Hans Christian Andersen Award in 2018 and finally receive the diploma in the award ceremony in Athens, Greece.

His novel ‘Hasti’ has won several awards: winner in the Festival that teens judged, the Silver Sign award of the Flying Turtle Festival and the best book of the year on behalf of Children's Book Council.

Among the other books by Hassanzadeh are: ‘Love and Mirror’, ‘The Moonlight Guest’, ‘An Umbrella with White Butterflies’, ‘This Weblog Will Be Transferred', 'The Backyard', and 'Kooti Kooti Watch out You Don’t Catch a Cold’.