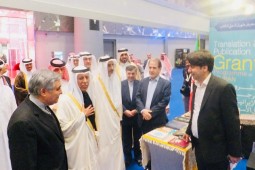 According to IBNA correspondent, quoting from the public relations office of Iran's Cultural Fairs Institute (ICFI)‎, Chairperson of Qatar Consultative Assembly paid his visit at the helm of a delegation of officials of the 30th Doha International Book Fair.

Reciting a poem by Iranian legendary bard Hafez, Chairperson of Qatar Consultative Assembly on her Iranian language, literature and culture. Then, Qatar's Minister of Culture and Sports H E Salah bin Ghanem Al Ali‎ referred to his visit to the 32nd Tehran International Book Fair last year and regarded that as a step which has boosted the cultural cooperation between Iran and Qatar.
‎
The Fair is being held under the slogan “Do you then not ponder?”, with the participation of 335 publishing houses from 31 countries.

Coinciding with the launch of the Qatar-France 2020 Year of Culture 2020, France is the guest of honor at Doha International Book Fair 2020. The Fair will also witness the largest participation from private Qatar publishing houses.

The 30th Doha International Book Fair which kicked off on Thursday, January 9 will run by January 18.‎