‎‘Trump in the White House’ available at Iranian bookstores ‎

Publish Date : Tuesday 7 January 2020 - 14:11
IBNA- ‘Trump in the White House: Tragedy and Farce’, by John Bellamy Foster ‎which provides a ‎critique of the actions taken by U.S. President has been ‎ published in Persian and is available at ‎Iranian bookstores.‎ 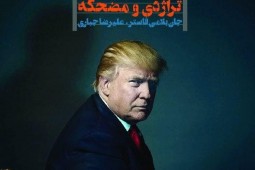 According to IBNA correspondent, the book which contains the views of an American leftist intellectual has been translated into Persian by Ali-Reza Jabbari (Azarang) and released by Afkar Publishing in Tehran.

In ‘Trump in the White House: Tragedy and Farce’, John Bellamy Foster does what no other Trump analyst has done before: he places the president and his administration in full historical context.

Foster reveals that Trump is merely the endpoint of a stagnating economic system whose liberal democratic sheen has begun to wear thin. Beneath a veneer of democracy, we see the authoritarian rule that oversees decreasing wages, anti-science and climate-change denialism, a dying public education system, and expanding prisons and military—all powered by a phony populism seething with centuries of racism that never went away.

But Foster refuses to end his book in despair. Inside his analysis is a clarion call to fight back. Protests, popular demands, coalitions: everyone is needed. Change can’t happen without radical, anti-capitalist politics, and Foster demonstrates that—even now, with the waters ever warming—it may yet be possible to stop the desecration of the Earth; to end endless war; to create global solidarity with all oppressed people. Could a frog do that?

Foster is a professor of sociology at the University of Oregon and also editor of Monthly Review. He writes about the political economy of capitalism and economic crisis, ecology and ecological crisis, and Marxist theory.

‘Trump in the White House: Tragedy and Farce’ in Persian has been published in 186 pages and 500 copies.