Publish Date : Saturday 4 January 2020 - 18:08
IBNA- CEO, Board of Directors and employees of Iran's Book House Institute (IBHI) send their ‎message of condolences over the demise of prominent Iranian Major General Qasem ‎Soleimani who was martyred in Baghdad, Iraq on Friday. ‎ 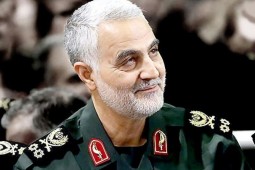 According to IBNA correspondent, the message reads that the martyrdom of the top general of Iran’s Revolutionary Guards Corps after a U.S. airstrike created a feeling of great sadness among Iranian nation. It refers to the efforts and sacrifices made by him during the Sacred Defense, the war former Iraqi dictator Saddam Hussein imposed on Iran in 1980-1988.

The message also cites his bravery as the commander of its Quds Force in fighting against the terrorist militant group ISIS (Islamic State of Iraq and the Levant) who committed horrific crimes in Iraq and Syria but was finally defeated and expelled.

“The Commander of Hearts joined his martyred companions after many years of crusade and his path will surely be followed,” the other part of the message reads.

Soleimani was martyred along with Abu Mahdi al-Muhandis, deputy commander of the Popular Mobilisation Forces (PMF, or Hashd al-Shaabi) and eight other Iranian and Iraqi companion officers.

Seyyed Abbas Salehi, Iran’s Minister of Culture and Islamic Guidance also sent a message of condolences after the martyrdom of Soleimani writing that the drops of his pure blood will strengthen national unity and the resistance of Islamic fronts.