‎20 books documenting the Sacred Defense to be unveiled

Publish Date : Wednesday 11 December 2019 - 16:43
IBNA- The fourth unveiling ceremony of the books featuring documents and oral ‎histories of the Sacred Defense (Iran-Iraq War) will be held in Tehran on Monday.‎ 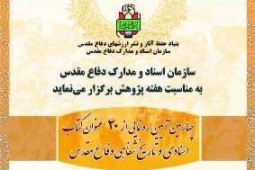 According to IBNA correspondent, the event is held on the occasion of Research Week in Iran and the books will be unveiled at the ceremony to be attended by the representatives of governmental and military institutes as well as the experts and researchers.

The Sacred Defense in Iran refers to the war the former Iraqi dictator Saddam Hussein imposed on Iran in 1980. The war lasted eight years and caused numerous damages to both countries and the left many casualties on both sides, including those Iranians who were martyred, injured or were taken as prisoners of war.