Publish Date : Wednesday 11 December 2019 - 14:44
IBNA- The meeting, ‘Ideas on Translation’ will be held in Tehran with German ‎orientalist Stefan Weidner and a number of Iranian translators in attendance on ‎Thursday. ‎ 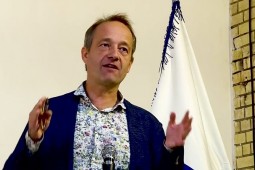 Stefan Weidner
According to IBNA correspondent, Iranian translators Kaveh Mir-Abbasi, Mahmoud Hosseinizad and Ahmad Pouri as well as Weidner, a translator and researcher of Arab literature and Islamic texts will attend the program.

Stefan Weidner (born in 1967 in Cologne) is a German Islamic scholar, writer and translator. He studied philosophy in the universities of Göttingen, Berkeley and Bonn and as a student, Stefan Weidner traveled to North Africa to study Islam more closely.

From 2001 to 2016 he was editor-in-chief of the journal ‘Fikrun wa Fann’ which is published by the Goethe Institute and is intended to contribute to the dialogue between Western and Islamic culture.

He has translated many poets from Arabic, including works by Adonis and Mahmoud Darwish. Since October 2012 Weidner is a founding member of the Akademie der Künste der Welt in Cologne. His book is titled ‘Art and Thought 102 (27): Journal for German-Muslim Dialog’.

The meeting, ‘Ideas on Translation’ is slated for Thursday, December 12 at 5 to 7 p.m.