‎“Night of French Travelers” due in Tehran

Publish Date : Wednesday 27 November 2019 - 14:32
IBNA- The program, “Night of French Travelers” will be held in the Hall Museum of ‎Iran’s National Library in Tehran today. ‎ 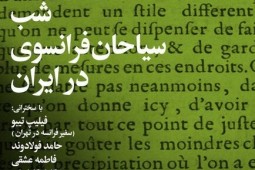 According to IBNA correspondent, the event is held by Bukhara Magazine in cooperation with French Cultural Attaché to Iran, Association of Iran-French Friendship and the National Library (Museum of Book and Documented Heritage).

An exhibition of books printed through lithography, ancient and rare books including the travelogues by noted French travellers as well as other documents which are kept in the Treasury of the National Library which will be put on public display.

“Night of French Travelers” will feature speeches to be made by French Ambassador to Iran Philippe Thiébaud as well as Iranian experts Hamed Fouladvand, Fatemeh Eshghi, Golnaz Golnarian and Ali Dehbashi which will discuss the works of French travellers from 17 to 19th centuries such as Jean Chardin (which has been translated twice in six volumes) and others.

These travelogues which all have been translated into Persian contain interesting and worthy notes about our country and are among key sources of study for researchers, university instructors and students.