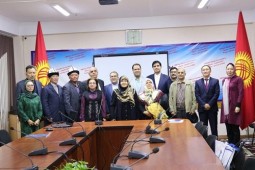 According to IBNA correspondent, the event was held in cooperation with Sa'di Foundation in Iran on the occasion of the 40th anniversary of the establishment of Bishkek State University.

The program was attended by Iranian officials, Iranologists, Kirgiz university professors, Persian language students and those interested in Iranian culture.