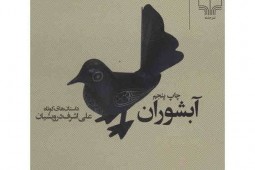 According to IBNA correspondent, the work has been translated into Turkish by Aras Aivazi and released by Manos Publishing to the Turkey’s market features 12 short stories which were written with a realistic approach in 1974.

In ‘Abshooran’, Ali Ashraf Darvishian (with the pen name Latif Talkhestani) focuses on the lives of underdogs and people on the margin of the society present political and social critique of the Iranian life in Kurdistan during those years.

After finishing teacher-training college, Darvishian began to teach at the poverty-stricken villages of Gilan-e-Gharb and Shah Abad (nowadays called Islam Abad). This atmosphere is featured in most of his stories.

His own life situation, as well as the experiences that he had from his teaching in those poor areas, was the inspiration for his literary works and also made him a critic of the political and social situation of Iran. Later, he moved to Tehran and continued his studies in Persian literature.

In 2006, Ali Ashraf Darvishian was in Australia as a guest of the Iranian Centre for Democracy and presented a number of lectures on a broad range of social and cultural issues.

Among his other works are: ‘Cloudy Years’, ‘From This Country’, ‘With My Father's Songs’ and 'Kurdish Legends and Fictions'.