‎“Night of Jean-Claude Carrière” to be held in Tehran

Publish Date : Monday 4 November 2019 - 14:48
IBNA- The program, “Night of Jean-Claude Carrière” from the series of meetings on ‎culture and art held by Bukhara Magazine will be held in Tehran on Thursday to honor ‎the leading French screenwriter and novelist.‎ 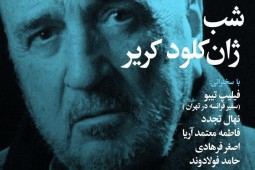 According to IBNA correspondent, in this program, the French Ambassador to Tehran Philippe Thiebaud, Iranian translator and writer Nahal Tajadod who is Carrière's wife as well as Iranian artists Fatemeh Mo'tamed Aria, Shahram Nazeri, Asghar Farhadi will make speech.

His Iranian wife, Tajadod has contributed to the translation of the Rûmi and has written a fictionalized biography of the great master of Sufism.

“Night of Jean-Claude Carrière” will be held in the Center for the Great Islamic Encyclopedia on Thursday at 5 p.m.