Persian Translations of Pirandello’s ‘Six Characters’ to be reviewed

Publish Date : Wednesday 30 October 2019 - 15:36
IBNA- Three Persian Translations of ‘Six Characters in Search of an Author’ by eminent ‎Italian dramatist Luigi Pirandello during a program at the House of Literati of Iran’s ‎Book House in Tehran.‎ 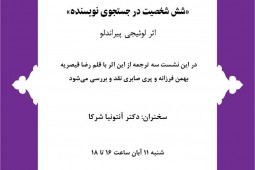 According to IBNA correspondent, the 13th meeting from the series of “Under the Umbrella of Criticism” will be held on Saturday, November 2 to review the translations of ‘Six Characters in Search of an Author’ by Bahman Farzaneh, Pari Saberi and Reza Qaisarieh. Iranian critic Antonia Shoraka will host the program.

First performed in 1921, the play is an absurdist metatheatrical work about the relationship among authors, their characters, and theatre practitioners:

An acting company prepares to rehearse the play Mixing it Up by Luigi Pirandello. As the rehearsal is about to begin, they are unexpectedly interrupted by the arrival of six strange people. The Director of the play, furious at the interruption, demands an explanation. The Father explains that they are unfinished characters in search of an author to finish their story. The Director initially believes them to be mad, but as they begin to argue among themselves and reveal details of their story, he begins to listen…