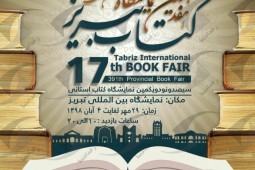 According to IBNA correspondent, the opening ceremony of the 17th Tabriz International Book Fair was held today and attended by Salehi, as well as Mas’oud Pezeshkian, lawmaker and representative of the northwest Iranian city of Tabriz in Parliament (Majlis); Hojat-ol Eslam Al-e Hashem, the Friday Prayer leader of that city and other officials in Tabriz International Fairground.

Several authors, cultural activists and publishers will participate in this book event in which 150000 titles of books by 900 Iranian publishers and 25000 others by foreign publishers will be put on public display. Among the 900 local publishers, 80 are from the East Azerbaijan Province including the city of Tabriz which provides the ground for a fair competition among the local publishers.

Concurrent with this book fair, the 10th Press Exhibition of the East Azerbaijan Province and the 7th Exhibition of Digital Media will also take place in Tabriz.

Over 50 cultural programs have been scheduled for the 17th Tabriz International Book Fair.