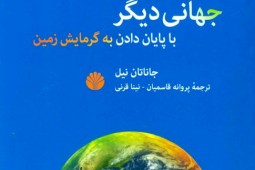 According to IBNA correspondent, the book has been translated into Persian by Iranian environmental activist Parvaneh Ghasemian in collaboration with Nina Gharani and released by Akhtaran Publishing.

‘Stop Global Warming: Change the World’ is introduced as: “Global warming threatens the planet, but people already have the technology to solve the problem. The real problem is that those in power and the corporations can't or won't act, so it falls to the only force that can challenge them: the six billion people of the world. Most books on climate change are devoted to showing the scale of the threat we face, but offer few solutions. Jonathan Neale's approach outlines the case for radical political change that alone can stop global warming, and asks: How do people organize to achieve this result?”

Jonathan Neale was born in New York City and now lives in London. He is the author of books of nonfiction and fiction for adults, though this is his first novel for young people. He has traveled in India, Nepal, Japan, Vietnam, the islands around Tahiti, Egypt, Sudan, Kenya, Venezuela, Pakistan, and Afghanistan. He has also sailed across the Atlantic in a small boat.

‘Stop Global Warming: Change the World’ in Persian has been published in 382 pages and 1000 copies.