Publish Date : Saturday 12 October 2019 - 15:44
IBNA- Several books by Austrian novelist, playwright, screenwriter and poet the Nobel ‎laureate Peter Handke have already been translated into Persian and some of the best ‎ones will be introduced as follows.‎ 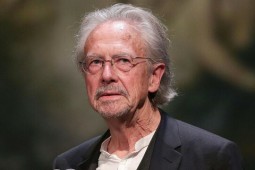 Peter Handke
According to IBNA correspondent, Handke has authored over 70 novels, plays and screenplays; among them, about 10 works have been translated into Persian.

The play ‘Offending the Audience’ (1966) which has been translated by Ali-Asghar Haddad called an "anti-play" because of its renouncements of theatricality. There is no plot. No story is being told at all. Instead, the audience is made aware that what they see is not a representation of anything else, but is in fact quite literal. The actors continuously repeat the point that this is not a play, and that nothing theatrical will happen.

‘Kaspar’ (1967) translated into Persian by Ali-Asghar Haddad is loosely based on the story of Kaspar Hauser. "Raised in a dark hole, at 17 he wandered into an 1824 German town knowing only a single sentence and became a scientific curiosity: a nearly-adult human without language and external influences, a tabula rasa upon which society and its scientific teachers could write with impunity.

‘The Goalie's Anxiety at the Penalty Kick’ which has been translated by Mohsen Jaddeh-Doustan is a true modern classic novel. The self-destruction of a soccer goalie turned construction worker who wanders aimlessly around a stifling Austrian border town after pursuing and then murdering, almost unthinkingly, a female movie cashier is mirrored by his use of direct, sometimes fractured prose that conveys "at its best a seamless blend of lyricism and horror seen in the runes of a disintegrating world".

One of his earlier novels ‘The Left-Handed Woman’ (1976) has been translated into Persian by Farrokh Moeini: After dining out with her husband to celebrate his return from a business trip, Marianne realizes that he will someday leave her and that she must learn to fend for herself and her young son now.

The novel, ‘On a Dark Night I Left My Silent House’ (1997) translated by Hamid Yazdanpanah is seen as one of his postmodern fiction works centered on the story of a pharmacist who embarks on a sea journey to find a medical herb and meets two bizarre men during the journey: a poet and an Olympic champion.