‎‘The Invention of the Jewish People’ to be reviewed

Publish Date : Sunday 13 October 2019 - 15:11
IBNA- A study of the historiography of the Jewish people, the book, is ‘The Invention of ‎the Jewish People’ by Shlomo Sand will be reviewed at a meeting in Vartan’s House in ‎Tehran on Monday.‎ 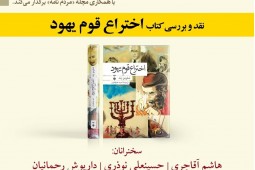 According to IBNA correspondent, in this event which is held by Nashr-e No Publishing in cooperation with Mardom-Nameh Magazine Iranian experts Hashem Aghajari, Hossein-Ali Nozari and Dariush Rahmanian will make speech.

‘The Invention of the Jewish People’ has been translated into Persian by Ahad Ali-Gholian is by Shlomo Sand, Professor of History at Tel Aviv University and generated a heated controversy after it was published partly due to its non-Zionist view.

The book concludes that the historical expulsion of Jewish people simply did not happen, that no one exiled the Jewish people from the region, and that the Jewish diaspora is essentially a modern invention
Originally written in Hebrew, the book has also been translated into German, Italian, Spanish, Portuguese, Arabic, Russian, and Slovene and as of late 2009 further translations were underway.