Two Persian translations of Palestinian novel to be reviewed ‎ 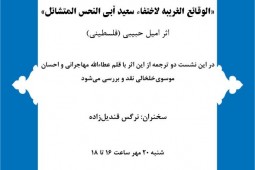 According to IBNA correspondent, the event is the twelfth program from a series titled ‘Under the Umbrella of Criticism’ in which the novel The Disappearance of Said Abu al-Nahs al-Mutashael’ by the late writer of Arabic literature and a politician Emile Shukri Habibi (1922–1996) translated into Persian twice by Ata’ollah Mohajerani and Ehsan Mousavi Khalkhali will be considered by expert Narges Ghandilzadeh .

A Christian Palestinian, Habibi was one of the most popular authors in the Middle East as a result of works depicting the conflicts in loyalties experienced by Palestinians living as an Arab minority in the Jewish state of Israel. He explored the duality of those Arabs who, like himself, did not leave their homeland during the 1948-49 Israeli occupation of Palestine.

His key novel is Strange Events in ‘The Disappearance of Said Abu al-Nahs al-Mutashael. In 1990, he received the Al-Quds Prize from the Palestinian Liberation Organization (PLO).