Farid Zakaria’s ‘From Wealth to Power’ at Iranian bookstores 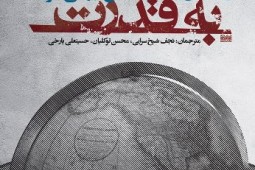 IBNA- ‘From Wealth to Power: The Unusual Origins of America's World Role’ by Indian-American journalist and author which Explores the way rich countries extend their power to other regions has been translated into Persian and released.

According to IBNA correspondent, the book has been translated into Persian by Najaf Shaikh-Saraei, Mohsen Tavakolian and Hossein-Ali Yarokhi and released by Rozaneh Publishing in Tehran in 243 pages.

What turns rich nations into great powers? How do wealthy countries begin extending their influence abroad? These questions are vital to understanding one of the most important sources of instability in international politics: the emergence of a new power. In From Wealth to Power, Fareed Zakaria seeks to answer these questions by examining the most puzzling case of a rising power in modern history--that of the United States.

If rich nations routinely become great powers, Zakaria asks, then how do we explain the strange inactivity of the United States in the late nineteenth century? By 1885, the U.S. was the richest country in the world. And yet, by all military, political, and diplomatic measures, it was a minor power.

To explain this discrepancy, Zakaria considers a wide variety of cases between 1865 and 1908 when the U.S. considered expanding its influence in such diverse places as Canada, the Dominican Republic, and Iceland. Consistent with the realist theory of international relations, he argues that the President and his administration tried to increase the country's political influence abroad when -they saw an increase in the nation's relative economic power.

But they frequently had to curtail their plans for expansion, he shows, because they lacked a strong central government that could harness that economic power for the purposes of foreign policy. America was an unusual power--a strong nation with a weak state. It was not until late in the century, when power shifted from states to the federal government and from the legislative to the executive branch, that leaders in Washington could mobilize the nation's resources for international influence.