‎‘Towards the Virtuous University’ in Persian to be reviewed

Publish Date : Wednesday 2 October 2019 - 14:41
IBNA- Persian translation of the book Towards the Virtuous University (Key Issues in ‎Higher Education) by Jon Nixon will be reviewed at a meeting in Tehran on Sunday, ‎October 6.‎ 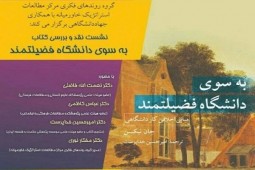 According to IBNA correspondent, the book which has been translated into Persian by Amir-Hossein Khodaparast (Ph.D.) will be discussed at a session to be attended by the translator and other Iranian experts Ne’matollah Fazeli, Abbas Kazemi and Mokhtar Nouri who will make speeches on the subject.

An introduction on ‘Towards the Virtuous University’ reads: “A good university is invariably assumed to be one which is managerially effective in terms of its economic efficiency, and is judged in terms of entrepreneurialism, self-promotion and competitive innovation.

This book argues that in the majority of institutions, these goals are being pursued to the exclusion of academic excellence and public service. It proposes that there is a marked lack of intellectual leadership at senior management level within HE institutions and that academic workers must assume responsibility for the moral purposefulness of their institutions.

This will not be a retreat into the old values of an elitist 'ivory tower', but a rejection of the current deeply stratified university system which prematurely selects students for differentiated institutional streams.”

Jon Nixon is Honorary Professor within the Education University of Hong Kong and Visiting Professor at Middlesex University, UK. He has written widely on cultural and intellectual history.
The book review meeting will be held in the Center for the Strategic Researches on the Middle East on Sunday.