Publish Date : Wednesday 25 September 2019 - 14:34
IBNA- Concurrent with the Sacred Defense Week, which is currently underway in Iran, ‎English audiobook 'City of Blood, the Commander's Account of the Liberation of ‎Khorramshahr’ has been released.‎ 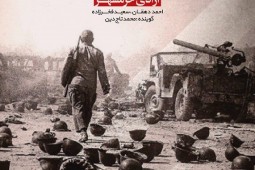 According to IBNA correspondent, 'City of Blood' by Ahmad Dehghan and Saeed Fakhrzadeh has been presented by Soureh Mehr Publishing, which has already released the audiobooks ‘Mr. Mayor’ by Davoud Amirian and Hand in Hand with Rain’ by Hedayatollah Behboudi and Morteza Sarhangi.

The audiobook is recited by Mohammad Taj al-Din and has been produced by Ava Nameh Company which is the biggest producer of audiobooks in Iran.

The Sacred Defense is the Iranian title for the 8- year war former Iraqi dictator Saddam Hussein imposed on Iran from Sep 22, 1980 to Aug 20, 1988. Khorramshahr city in the oil rich Khuzestan Province of Iran was one of the first cities captured by Iraqis but was liberated by Iranian military forces on May 24, 1982.