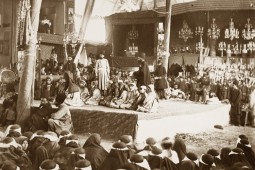 Gertrude Margaret Lowthian Bell was a British writer, traveler, political officer, administrator, and archaeologist who explored, mapped, and became highly influential to British imperial policy-making due to her knowledge and contacts, built up through extensive travels in Greater Syria, Mesopotamia, Asia Minor, and Arabia.

Born in the north of England, at Washington Hall, County Durham She studied at the universities of both London and Oxford, and was the first woman to gain an Oxford first-class degree in modern history, when still not quite twenty years of age.

She paid lengthy visits to her diplomatic relatives in Bucharest, Tehran, and Berlin. Her Iranian stay, 1892-93, led to the publication of her aptly titled ‘Persian Pictures, a Book of Travel’ (1894).

As was often the fashion at the time, the work appeared anonymously, but it was reissued posthumously under her own name in 1928 with its shorter title ‘Persian Pictures’, and with a preface by E. Denison Ross. It was reprinted in a third edition in 1947 in The Bouverie Library with a preface by A. J. Arberry.

An admirer of Persian literature, she began to study Persian in Tehran and a cultural and esthetic interest maintained throughout her life—and by 1897 her mastery of the language had reached the point where she was able to publish some remarkable verse translations entitled Poems from the ‘Divan of Hafiz’. The translation is done in a free style, with little attention paid to the order of the lines, so that it is not always easy to identify a particular verse.

‘Safar Nameh, Persian Pictures: A Book of Travel’ (1894) which was authored during the reign of the Qajar King, Naser al-Din Shah. Her subjects in the book range from Roman ruins to Ottoman graves to shopping in the bazaars, and from the bustling life of cities to the isolation of the desert.

Having studied the Persian language in preparation for her journey, she was able to enter into the life of the country, and especially of its women, more deeply than a casual visitor. Bell captures a sense of delight at a mysterious land still marked by the traces of many of the great civilizations of the past.

In her travelogue, she writes on Muharram saying that with the beginning of this month, the concealed religious excitement comes to the surface and every night, people’s cries of mourning are heard all around.

In a letter she writes: “From the first to the tenth the Shi'ahs mourn for Imam Hussein [AS], the Prophet's grandson, who was invited over from Mecca by the 'Iraqis to be Khalif, and when he arrived got no support from them, was opposed by the armies of his rival Mu'awiyah at the place where Karbala stands now, saw his followers die of thirst and wounds and was killed himself on the 10th.

In Muharram ceremonies, the wild drums drew near, the glare of torches filled the sky and the processions turned into the courtyards. Torches, and men leading horses in gorgeous trappings and men carrying huge banners and men with trays of lights on their heads.

And then a black robed company which spread out in two rows across the court and they were swinging chains, with which they beat their backs - the black robes were open to the waist at the back so that the chains might fall on their bare skin. They swing them very skilfully, with a little jerk at the top of the swing so that the chains barely touched the skin, but the effect was wonderful - the black figures in the glaring torch light, swinging rhythmically from side to side with the swing of the chains, and the drums marking the time.

Next came the breast-beaters [chest beaters], naked to the waist; and they stood in companies and beat their chests in unison to a different rhythm of drums. Each procession surged through the courtyards, swung their chains, beat their chests and surged out into the street, and another followed it, interminably.”