Publish Date : Friday 23 August 2019 - 16:21
IBNA- An Italian student Mattia Zampol Dortia who has participated at a knowledge ‎improvement course of Persian language in Tehran says that his interest in Iranian ‎culture prompted him to learn Persian.‎ 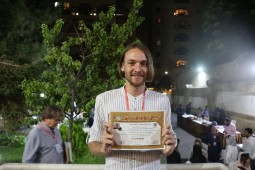 Mattia Dortia ‎
Speaking to IBNA, Mattia who has attended the 87th edition of knowledge improvement course of Persian language held by Sa’di Foundation in Tehran said that he has studied Persian language and literature for two years as well as Iranology and demography in Bologna University.

Mattia believes that the Persian language is very difficult, particularly in conversation. However, he says that reading Persian books is not that much difficult.

The Italian student said that he has already read ghazals by Mowlana Jalal al-Din Rumi and Laili and Majnoun by Nezami Ganjavi. But is also familiar with the ghazals by Hafez and Sa’adi as well as Rubaiyat of Omar Khayyam, poems of Attar and of course short stories and novels by Sadegh Hedayat.

Stressing that he is very fond of Persian literature, Mattia says that the number of Persian language instructors and books are still few.