Brecht’s ‘The Good Person of Szechwan’ released in Persian

Publish Date : Saturday 31 August 2019 - 17:17
IBNA- The play, ‘The Good Person of Szechwan’ (1943) by the leading German ‎playwright and poet Bertolt Brecht has been translated into Persian and published.‎ 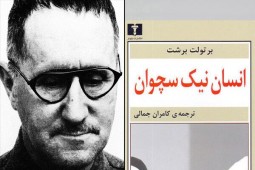 According to IBNA correspondent, the play which has been written in collaboration with Margarete Steffin and Ruth Berlau has been translated into Persian by Kamran Jamali and released by Niloufar Publishing in Tehran.

The play is an example of Brecht's "non-Aristotelian drama", a dramatic form intended to be staged with the methods of epic theatre. The play is a parable set in the Chinese "city of Sichuan".

‘The Good Person of Szechwan’ follows a young prostitute, Shen Teh , as she struggles to lead a life that is "good" according to the terms of the morality taught by the gods and to which her fellow citizens of Szechwan (Sichuan) pay no regard, without allowing herself to be abused and trod upon by those who would accept and, more often than not, abuse her goodness.

Her neighbors and friends prove so brutal in their filling of their bellies that Shen Teh is forced to invent an alter ego to protect herself: a male cousin named Shui Ta, who becomes a cold and stern protector of Shen Teh's interests.

It has been argued that Brecht's use of the literary device of the split character in this play is a representation of the antagonism between individual-being and species-being that underlies bourgeois societies.

Most of Brecht’s plays such as ‘The Caucasian Chalk Circle’, ‘Mother Courage and Her Children’, ‘He Said Yes / He Said No’, ‘Round Heads and Pointed Heads’ and ‘Life of Galileo’ have already been translated into Persian and staged in Iranian playhouses.