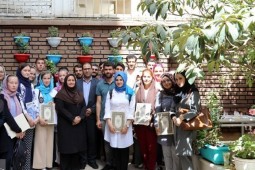 According to IBNA correspondent, Uzbek professors and students are attending the program launched by AZFA Center of Allameh Tabatabei University titled: “The Course for Improving Knowledge of Persian Language and Literature”.

As well as them, several students from countries such as Turkey, South Korea, China and Tunisia have also participated in the course.

Furthermore sightseeing in Tehran including The Book Garden, Nature Bridge, Sa’adabad Palace, Sacred Defense Museum and travel to ancient Iranian cities of Kashan and Isfahan are among the other programs of Allameh Tabatabeai University Azfa Center for the guests.

The closing ceremony of the program will be held on August 29.