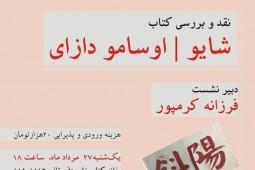 According to IBNA correspondent, the event has been organized by Daf Publishing with Iranian author Farzaneh Karampour as secretary of the session. ‘The Setting Sun’ is the first novel by Osamu Dazai (1909-1948) which has been translated by into Persian by Morteza Sane’

‘The Setting Sun’ is told through the eyes of Kazuko, the unmarried daughter of a widowed aristocrat. Her search for self meaning in a society devoid of use for her forms the crux of the novel.

Kazuko’s mother falls ill, and due to their financial circumstances they are forced to take a cottage in the countryside. Her brother, who became addicted to opium during the war is missing. When he returns, Kazuko attempts to form a liaison with the novelist Uehara. This romantic displacement only furthers to deepen her alienation from society.

Osamu Dazai is considered one of the foremost fiction writers of 20th-century Japan. A number of his most popular works, such as ‘The Setting Sun’ and ‘No Longer Human’ (Ningen Shikkaku), are considered modern-day classics in Japan.