Publish Date : Wednesday 14 August 2019 - 16:01
IBNA- Terry Eagleton’s ‘The Function of Criticism’ which probes the concept of critique ‎and sheds a new light on the subject has been translated into Persian and released. ‎ 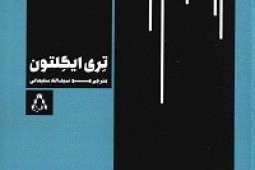 According to IBNA correspondent, this book by British literary theorist, critic, and public intellectual Terry Eagleton who is the Distinguished Professor of English Literature at Lancaster University has been translated into Persian by Saifollah Soleimani and released by Afraz Publishing in Tehran.

This wide-ranging book ‘The Function of Criticism’ argues that criticism emerged in early bourgeois society as a central feature of a "public sphere" in which political, ethical, and literary judgments could mingle under the benign rule of reason. The disintegration of this fragile culture brought on a crisis in criticism, whose history since the 18th century has been fraught with ambivalence and anxiety.

Eagleton's account embraces Addison and Steele, Johnson and the 19-century reviewers, such critics as Arnold and Stephen, the heyday of Scrutiny and New Criticism, and finally the proliferation of avant-garde literary theories such as deconstructionism.

The book is nothing less than a history and critique of the "critical institution" itself. Eagleton's judgments on individual critics are sharp and illuminating, which his general argument raises crucial questions about the relations between language, literature and politics.

A prominent critic of postmodernism, Eagleton has published over forty books, but remains best known for ‘Literary Theory: An Introduction’ (1983), which has sold over 750,000 copies. The work elucidated the emerging literary theory of the period, as well as arguing that all literary theory is necessarily political.

In his works such as ‘The Illusions of Postmodernism’ (1996) and ‘After Theory’ (2003), he argues that, influenced by postmodernism, cultural theory has wrongly devalued objectivity and ethics. His thinking is influenced by Marxism and by Christian faith.

‘The Function of Criticism’ in Persian has been published in 150 pages and 300 copies.