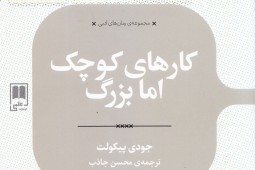 According to IBNA correspondent, ‘Small Great Things’ which features two main characters, a black American woman and his white defense lawyer has been translated into Persian by Mohsen Jazeb and released by Elmi Publishing in Tehran.

The author, Jodi Lynn Picoult was awarded the New England Bookseller Award for fiction in 2003. Currently, approximately 14 million copies of her books are in print worldwide, translated into 34 languages including Persian.

Picoult studied creative writing at Princeton University and graduated in 1987. She published two short stories in ‘Seventeen’ magazine while still in college.

Immediately after graduation, she began a variety of jobs, ranging from editing textbooks to teaching eighth-grade English. She earned a master's degree in education from Harvard University. Her first novel is ‘Songs of the Humpback Whale’ (1992).

The story line of ‘Small Great Things’ which its titled quotes from the words of Martin Luther King involves an African-American labor/delivery nurse in charge of newborns at a Connecticut hospital. She is ordered not to touch the baby of a white supremacist couple.

After the baby dies in her care, she is charged with murder and taken to court. The story is told from the complex multiple racial perspectives of the principal characters, the nurse Ruth, Turk Bauer, the white supremacist father of the baby, and Kennedy McQuarrie, Ruth's lawyer.

‘Small Great Things’ in Persian has been published in 496 pages and 300 copies.