‎‘Introduction to Twentieth-Century American Poetry’ to be reviewed 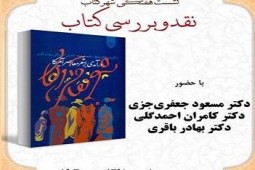 According to IBNA correspondent, the book has been translated into Persian by Kamran Ahmad-Goli and Bahador Bagheri will be discussed at a meeting with the translators and an expert, Mas’oud Jafari Jazi in attendance.

‘The Cambridge Introduction to Twentieth-Century American Poetry’ is designed to give readers a brief but thorough introduction to the various movements, schools, and groups of American poets in the twentieth century.

It will help readers to understand and analyze modern and contemporary poems. The first part of the book deals with the transition from the nineteenth-century lyric to the modernist poem, focusing on the work of major modernists such as Robert Frost, T. S. Eliot, Ezra Pound, Wallace Stevens, Marianne Moore, and W. C. Williams.

In the second half of the book, the focus is on groups such as the poets of the Harlem Renaissance, the New Critics, the Confessionals, and the Beats. In each chapter, discussions of the most important poems are placed in the larger context of literary, cultural, and social history.

The translators have added footnotes to the book which makes it more easier and enjoyable for the Persian readers.