Book on history of legal theory at Iranian bookstores

Publish Date : Wednesday 17 July 2019 - 16:29
IBNA- ‘A Short History of Western Legal Theory’ by the late Irish scholar John Maurice ‎Kelly addressing the students of law has been translated into Persian and released.‎ 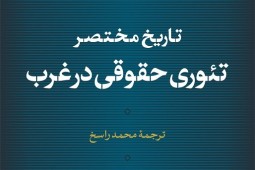 According to IBNA correspondent, the book by John Maurice Kelly has been translated into Persian by Mohammad Rasekh and released by Nay Publishing in Tehran.

‘A Short History of Western Legal Theory’ is introduced as a work which outlines the development of legal theory from pre-Roman times to the twentieth century. It aims to relate the evolution of legal theory to a parallel development in political theory and political history and accordingly offers the reader an account of relevant contemporaneous political, religious, and economic events.

Each chapter commences with a general historical background for the relevant period, and discusses how political events and political and legal theory are both related to one another and occasionally influence one another.

No other English publication aims to anchor legal theory to contemporary general history in this way, shunning the more conventional approach to legal theory via the study of "traditions" or "schools," providing a basic text for students of jurisprudence, legal theory, and politics.

‘A Short History of Western Legal Theory’ in Persian has been published in 620 pages and 500 copies.