Two Persian translations of Michelle Obama’s ‘Becoming’ to be reviewed

Publish Date : Saturday 6 July 2019 - 13:57
IBNA- Iran’s Book House Institute (IBHI) will hold a meeting to review two Persian ‎translations of the bestseller book ‘Becoming’ by Michelle Obama which have been ‎published in our country.‎ 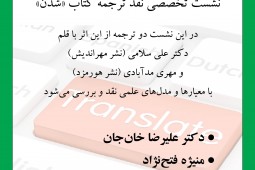 According to IBNA correspondent, in the meeting which is held today in cooperation with the Nationwide Center of Iranian Translators Unions, two translations of ‘Becoming’ first by Ali Salami, released by Mehrandish Publishing and second by Mehri Madabadi (Hourmazd Publishing) will be reviewed based on scientific criteria and models.

‘Becoming’ is the memoir of former United States First Lady Michelle Obama published in 2018. Described by the author as a deeply personal experience the book talks about her roots and how she found her voice, as well as her time in the White House, her public health campaign, and her role as a mother. The book is published by Crown and will be released in 24 languages.
The 400 pages book sold 1.4 million copies in its first week. After 15 days, the book became the best-selling book in the US for the year 2018. By March 26, 2019, ‘Becoming’ had sold 10 million copies.

Two Iranian experts Ali-Reza Khanjaan and Manijeh Fathnejad will review the books in the event which is scheduled to be held at the Literati House of Iran’s Book House Institute at 4 to 6 p.m.