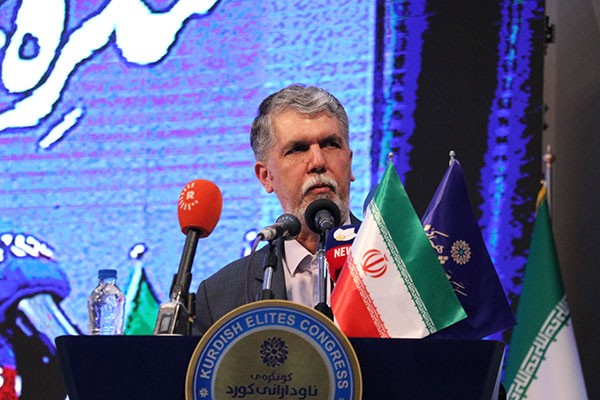 Seyyed Abbas Salehi
According to IBNA correspondent, the ceremony was held in Molavi (Rumi) Hall of Sanandaj, Kurdistan province of Iran where Salehi said: "I'm so glad that I'm here attending a felicitous event which we have been waiting for that from a long time ago."

“The Renowned Kurds Congress is not simply focused on the deceased figures since you have many living treasures as well. You people proved that you both cherish the memory of the past and honor those living figures who are sources of pride for us,” he stated.

Elsewhere in his remarks, Minister of Culture and Islamic Guidance pointed out: “Iranian and Kurdish people are the same. Not only from the advent of history but from the prehistory eras. We have laughed at your laughs and cried with your cries shoulder by shoulder.”

“Kurdish language which dates back to several thousand years ago is a constant living language, a treasure of expressions and allegories,” Salehi said.

“Kurdish poetry, tales and in general literature, portray thousands of years permeated with ups and downs Kurds have experienced. Kurdish music takes us to the depth of the human history. The same is true about the visual arts of this region such as calligraphy and painting,” he added.

It should be noted that 30 figures of art and Culture from Kurdistan were honored at this ceremony.