Memorable operations of Iranian Navy recorded in a book

Publish Date : Thursday 4 July 2019 - 18:19
IBNA- ‘The Atlas of Memorable Operations of Iranian Navy’ centered on the years of the ‎Sacred Defense (Iran-Iraq war) has been released. ‎ 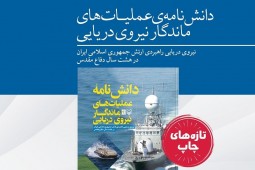 According to IBNA correspondent, the atlas features a collection of documents and evidences provided in war zones. The project has been compiled by military experts, memoirs of Iranian combatants, veteran soldiers, casualties and the survivors of the Sacred Defense, the war former Iraqi dictator Saddam Hussein imposed on Iran.

As well as providing accurate information in various fields including historical and military fields, the atlas also takes considerations of social, economic and religious issues.

As the authors of the book maintain, the work tries to stay away from sentiments and organizational affiliations and simply focuses on realities and events that happened during the sacred Defense.

Among the issues observed in the atlas are the history of border disputes between Iran and Iraq, the beginning of the war Iraq waged against Iran, the situation of the Islamic Republic of Iran’s Navy and Iraq’s in the beginning of the war; units and equipment over Iranian Navy during the 8-year Sacred Defense special operations carried out by the Iranian Commandos, Iranian martyrs and prisoners of war as well as a chronology of Iranian Navy’s operations.

One of the chapters of the book provides information about Hormuz Strait as one of the highways of the world economy and its role in Iran’s trade with other countries during the war. These days the issue of Hormuz Strait is again under the spotlight of the world media.