E.P. Thompson’s seminal book to be reviewed in Tehran ‎

Publish Date : Monday 1 July 2019 - 15:38
IBNA- Persian translation of ‘The Making of the English Working Class’ by British writer ‎and historian Edward Philip Thompson will be reviewed at a program from the series of ‎philosophy, politics and economy meetings in Tehran.‎ 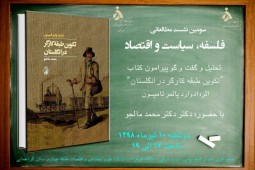 According to IBNA correspondent, ‘The Making of the English Working Class’ (1963) which has been translated into Persian by Mohammad Maljou is an account of artisan & working-class society in its formative years, 1780-1832, adds an important dimension to our understanding of the 19th century.

E.P. Thompson shows how the working class took part in its own making & recreates the whole life experience of people who suffered loss of status & freedom, who underwent degradation & who yet created a culture & political consciousness of great vitality.

A socialist and peace campaigner, Thompson is best known today for his historical work on the British radical movements in the late 18th and early 19th centuries, in particular ‘The Making of the English Working Class’.

The program is scheduled for today at Al-Zahra University in Tehran.