Memoires of Afghan martyrs of Sacred Defense to be reviewed ‎

Publish Date : Wednesday 26 June 2019 - 17:23
IBNA- The book, 'From Layli Plain to Majnoun Island' featuring the memoirs of the ‎Afghan combatants who were martyred during the Sacred Defense (Iraq's imposed war ‎on Iran) will be reviewed in Tehran on Wednesday. ‎ 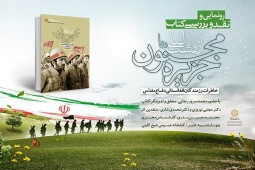 According to IBNA correspondent, the meeting for reviewing the book 'From Layli Plain to Majnoun Island' authored by Afghan writer and poet Muhammad Sorour Rajaei will  be held at Sheikh Kolayni Public Library in Tehran. The session will be attended by Rajaei as well as book critics who will discuss the work.

The book which has been published in 528 pages portrays the events experienced by Afghan combatants in the years of the Sacred Defense (the war former Iraqi dictator Saddam Hussein imposed on Iran. According to the author, the work is the result of 10 years research on the subject.

The book can be seen as the first serious research on Afghan combatants of the Sacred Defense. Among them, over 2000 of them were martyred in the battlefields.

The meeting for reviewing the book 'From Layli Plain to Majnoun Island' is scheduled for Wednesday at 3 to 5 p.m.