Derrida’s ‘On Cosmopolitanism and Forgiveness’ rendered into Persian ‎

Publish Date : Friday 21 June 2019 - 18:30
IBNA- ‘On Cosmopolitanism and Forgiveness’ by Jacques Derrida which has recently ‎been published in Persian focuses on the issues of the cities of refugees and deconstructs ‎these concepts to show the paradoxes within them. ‎ 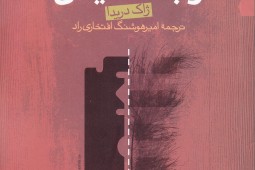 According to IBNA correspondent, ‘On Cosmopolitanism and Forgiveness’ has been translated into Persian by Amir-Houshang Eftekhari Raad and ‎released by Gaam-e No Publishing in Tehran. ‎

The book is introduced as: “Part of the Thinking in Action series, providing clear and accessible pieces from major thinkers ‘On Cosmopolitanism and Forgiveness’ contains two surprisingly lucid essays from a writer notorious for producing difficult prose.

Derrida is the consummate French philosopher, and his work has mainly been the province of grad students and the coffeehouse set, which is unfortunate because he has much more to offer.

In this volume, he turns his attention to international human rights, asking penetrating questions about our capacity to forgive, heal, and reconcile in a world fraught with incalculable evil.

Derrida's most important contribution to modern philosophy is his infamous technique of textual interpretation, deconstruction. The technique doesn't come easily, but its critical perspective allows one to draw connections between seemingly unrelated ideas.  And that's what Derrida does here, tracing lines between cities, asylum, and reconciliation.

The book is grounded in the immediacy of present-day happenings, taking up questions about human rights, amnesty, the Gulf War, and East Timor. Of course, readers will do well to have some background in philosophy, but the heart of the book is for all of us.

‘On Cosmopolitanism and Forgiveness’ in Persian has been published in 155 pages and 700 copies.