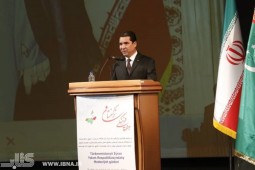 According to IBNA correspondent, the opening ceremony of Turkmenistan Cultural Week scheduled for June 16-18 was held in the Vahdat Hall of Tehran with the Head of Iran's Islamic Culture and Relations Organization Abuzar Ebrahimi Turkaman and Turkmenistan Culture Minister Atagely Shamuradov in attendance.

Shamuradov said at the ceremony: “Increasing Cultural Relations between Iran and Turkmenistan testifies to our friendship, brotherhood and good-neighborliness. In light of these warm relations, the artists and cultural figures of the two countries are interested in joint projects.”

“Last year the cultural week of the Islamic Republic of Iran was held in our country and in April, Norouz [the New Iranian Year] was celebrated in Iran-Turkmenistan border,” he stated.

“Such programs aim to develop the cultural cooperation between the two nations and introducing their ancient, precious cultures to the world,” Turkmen Culture Minister added.

In the cultural week, Turkmen musicians will perform and the works, costumes and handicrafts by Turkmen artists will be showcased at Iran’s Artists Forum in Tehran. Moreover, a specialized historical meeting on the Silk Road will be held during the event.