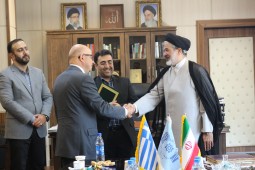 According to IBNA correspondent, at a meeting with the Head of Iran's Majlis (Parliament) Library Hojat ol-Eslam Seyyed Ali Emad, Greece Ambassador discussed the common cultural grounds between the two countries.

At the beginning, Emad stressed on the importance of science history in Iran and services of Iranian Islamic civilization to the world: “Throughout the world, wherever science is produced, all people should have access to that. Regarding the importance of science in ancient Greece, Iran, India and Egypt, the world society has always taken advantage of their knowledge and the efforts of Iranian and Greek philosophers and scientists who were among the prominent figures of human wisdom are undeniable.”

Head of Iran's Majlis (Parliament) Library then referred to the status of Iran in the lawmaking system of Asia and elaborated on the methods of providing services by the library to the Iranian lawmakers as well as researchers and others.

Emad expressed readiness for cooperation with Greek scholars and said that the library contains a precious collection of books by Greek philosophers as well as other books on the history of Greece and welcomed cultural interaction with Greece Parliament Library and other key libraries in that country.

Following the session, they discussed the 85th IFLA General Conference and Assembly which is scheduled for August 24 to 30 in Athens Greece.