‎Meeting on “Iran from the View of German Travelogues” due ‎

Publish Date : Sunday 9 June 2019 - 17:14
IBNA- The meeting “Iran from the View of German Travelogues” will be held at The ‎Literati House of Iran’s Book House Institute on Tuesday, June 11.‎ 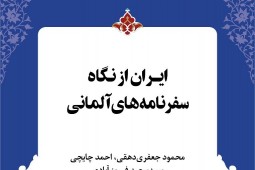 According to IBNA correspondent, the event will be attended by three Iranian experts Mahmoud Ja’fari Dehaghi, Ahmad Chaychi and Sa’eed Firouzabadi who will deliver their lectures in the event.

Among the European explorers and orientalists, Germans belong to the pioneers who have broadly travelled and reported about Iran.

Considering the periods that these travelers have visited and reported, the early-modern time might be assumed as the Golden Time.
Especially when Shah ‘Abbas I (r. 1588-1629) came to power in Isfahan and run an outward looking agenda, Persia has opened her doors to European traveler, especially Germans.