Corey Robin’s ‘The Reactionary Mind’, a history of conservatism

Publish Date : Monday 20 May 2019 - 17:52
IBNA- ‘The Reactionary Mind: Conservatism from Edmund Burke to Sarah Palin’ by ‎American political theorist Corey Robin provides a history of conservatism from the 17th ‎century has been translated into Persian and published.‎ 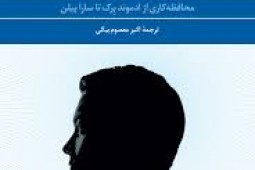 According to IBNA correspondent, in this book which has been translated by Ali-Akbar Ma’soum Baigi into Persian and released by Negah Publishing, Robin (1967) has also concentrated his research efforts on the contemporary forms of conservatism and new conservatism as well as the difficulties of both liberals and the New Left in dealing with American supremacy after the end of the Cold War.

‘The Reactionary Mind: Conservatism from Edmund Burke to Sarah Palin’ traces conservatism back to its roots in the reaction against the French Revolution, Robin argues that the right is fundamentally inspired by a hostility to emancipating the lower orders.

Some conservatives endorse the free market, others oppose it. Some criticize the state, others celebrate it. Underlying these differences is the impulse to defend power and privilege against movements demanding freedom and equality.

Despite their opposition to these movements, conservatives favor a dynamic conception of politics and society--one that involves self-transformation, violence, and war. They are also highly adaptive to new challenges and circumstances. This partiality to violence and capacity for reinvention has been critical to their success.

The book ranges widely, from Edmund Burke to Antonin Scalia, from John C. Calhoun to Ayn Rand. It advances the notion that all rightwing ideologies, from the eighteenth century through today, are historical improvisations on a theme: the felt experience of having power, seeing it threatened, and trying to win it back.

Corey Robin is an American political theorist, journalist and professor of political science at Brooklyn College and the Graduate Center of the City University of New York. His articles have been published in ‘The New York Times’, ‘The Washington Post’, ‘The London Review of Books’, ‘The Nation’, ‘Jacobin’ and ‘Dissent’.

‘The Reactionary Mind’ in Persian has been published in 386 pages and 200 copies.