Publish Date : Wednesday 15 May 2019 - 17:27
IBNA- Four books compiled based on the memoires of martyred Iranian commanders of ‎Sacred Defense (Iran-Iraq War) have been published and will be unveiled on ‎Wednesday. ‎ 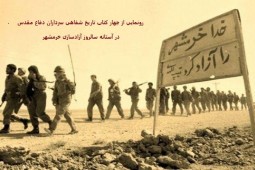 According to IBNA correspondent, the ceremony has been organized by the Center of Documents and Researches of the Sacred Defense and be held on the anniversary of the liberation day of Khoramshahr city in southwest Iran.

The martyrs whose accounts have been published as books are Generals Ahmad Gholampour, Ahmad Gholami, Morteza Ghorbani and Hossein Daghighi.

The Sacred Defense in Iran refers to the eight years of war that former Iraqi dictator Saddam Hussein imposed on Iran in 1980 to 1988.