Publish Date : Saturday 11 May 2019 - 15:54
IBNA- Emile Zola’s masterpiece ‘Germinal’ as a graphic novel adapted by Philippe ‎Chanoinat has been translated into Persian and published.‎ 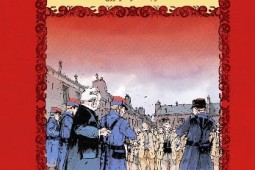 According to IBNA correspondent, illustrated by Jean-Michel Arroyo, this version of Germinal has been translated into Persian by Mahmoud Goudarzi. The Iranian publisher of the book is Chatrang Publishing in Tehran.

Often considered Zola's masterpiece and one of the most significant novels in the French tradition, ‘Germinal’ is an uncompromisingly harsh and realistic story of a coalminers' strike in northern France in the 1860s – has been published and translated in over one hundred countries and has additionally inspired five film adaptations and two television productions.

In the novel, Etienne Lantier, an unemployed railway worker, is a clever but uneducated young man with a dangerous temper. Forced to take a back-breaking job at Le Voreux mine when he cannot get other work, he discovers that his fellow miners are ill, hungry, in debt, and unable to feed and clothe their families. When conditions in the mining community deteriorate even further, Lantier finds himself leading a strike that could mean starvation or salvation for all.

Graphic novel ‘Germinal’ in Persian has been published in 96 pages.