Publish Date : Wednesday 24 April 2019 - 19:44
IBNA- At an official ceremony, Iran and China launched a new round of cooperation in ‎publishing on the first day of the 32nd Tehran International Book Fair.‎ 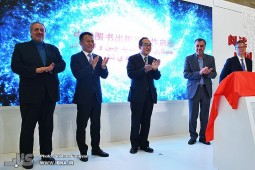 According to IBNA correspondent, during this ceremony which was held at Chinese stand in the 32nd Tehran International Book Fair, the Persian version of the book ‘China Story’ was unveiled. The ceremony was attended by the CEO of Iran’s Book House Institute Niknam Hosseinipour, a number of Chinese authors and publishers as well as their Iranian counterparts.

In this event, Chinese writer of children books Xue Tao expressed pleasure over the publication of his book ‘Other Side of the River’ in Persian: “I’m so glad that as well as Russian and Serbian, my book has been translated into Persian and my little bear has traveled to Iran.”

Following the ceremony, Cao Wenxuan a winner of Hans Christian Andersen Award, vice president of Beijing Writers Association and a professor and doctoral tutor at Peking University said: “I believe if we want our works to reach other countries, we should write stories; since writing stories will convey languages to other countries. Because Chinese culture has many stories, a good ground is provided for publishing Chinese fiction books.”

The novels of Wenxuan have been translated into English, Dutch, French, German, Italian, Japanese, Korean, and Serbian.