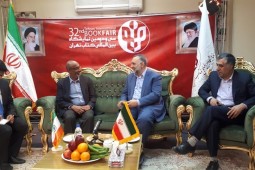 According to IBNA correspondent, as well as Javadi who is also the deputy of Ministry of Culture and Islamic Guidance, the meeting was also attended by the CEO of Iran’s Book House Institute (IBHI) Niknam Hosseinipour as well as Ali Fereidouni, the director of the Grant Plan of the Ministry of Culture and Islamic Guidance which is aimed to back the translation and publication of Persian books into foreign languages.

Mr. Dharmendra stated at the meeting that is the first time he attends Tehran International Book Fair and stressed on the boosting cultural ties between Iran and India. The ambassador added that the Persian language is still taught in India.

Referring to the education of Iranian students in India and the potentials for exchanging students between the two countries, Javadi said: “The cultural relations between us should not be limited to our past literature and histories and the ground should be prepared for introducing our young contemporary writers.”

Following the session, Hosseinipour described the activities of Iran’s Book House Institute such as holding the book of the year warmth of war and expressed willingness for cooperation with Indian literati and publishers.