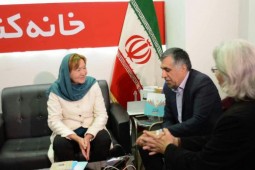 Véronique Petit & Niknam Hosseinipour ‎
According to IBNA correspondent, during her visit to the stand of the Book House Institute, Petit was informed by Hosseinipour of the activities of the institute such as creating and processing data banks of Iranian book activists and print industry, holding Iran's Book of the Year Award and World Award as well as initiating plans to back the Iranian literati and publishers.

He also referred to Iran’s Book News Agency as the sole specific news outlet of books and publication in the country, which is affiliated to the Book House.

Hosseinipour expressed the readiness of IBHI to host Belgian authors and publishers. He pointed to the attention of Iran Minister of Culture and Islamic Guidance to cultural diplomacy as a more striking method than official diplomacy.

Belgian Ambassador to Iran said for her part that she has been astonished by the massive turn out in Tehran Book Fair. She added that Belgian comic strip books as a genre are engaging and popular.

Tehran International Book Fair is the top Iranian book event held annually. The 32nd edition of this event is currently underway with China as the guest of honor and will run by May 4 in the Mosalla of Imam Khomeini in Tehran.