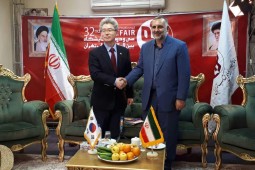 Jeong-Hyun Ryu ‎and Mohsen Javadi
According to IBNA correspondent, Jeong-Hyun Ryu met Mohsen Javadi who is also the Director of the 32nd Tehran International Book Fair and referred to importance of the visit by the Leader of the Islamic Revolution Ayatollah Ali Khamenei to the 32nd TIBF, saying that’s very important for a nation whose leader pays a 3-hour visit to a book fair.

Elsewhere in his remarks, the ambassador referred to the long history of relations between Iran and Korea which dates back to 2000 years ago and Iran’s participation in South Korean book events.

Tehran International Book Fair is the top Iranian book event held annually. The 32nd edition of this event is currently underway with China as the guest of honor and will run by May 4 in the Mosalla of Imam Khomeini in Tehran.