Publish Date : Wednesday 17 April 2019 - 19:31
IBNA- The novel ‘The Wren’ (Çalıkuşu) by Turkish author and playwright Reşat Nuri ‎Güntekin (1889-1956) has been translated into Persian and reached in Iranian Book ‎Market. ‎ 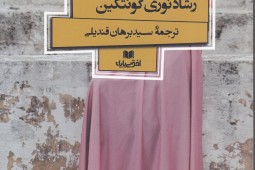 According to IBNA correspondent, the book has been translated into Persian by Seyyed Borhan Ghandili and released by Ofogh Beepayan Publishing is the key novel by Reşat Nuri Güntekin.
The events in ‘The Wren’ take place in the early twentieth century, near the collapse of a war weary Ottoman Empire and the creation of the Turkish republic. Most of the novel is recounted in first-person diary format by Feride.

In the first section, Feride describes her childhood, beginning from the beginning and leading to the events that led her to a strange hotel room. The second and largest section consists of diary entries describing her adventures in Anatolia.  The third section is the only one written from the third person point of view, describing Feride's visit to her home.

‘The Wren’ in Persian has been published in 508 pages.