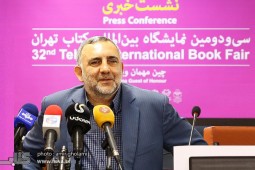 At the beginning of the conference, Javadi said: “Book has always played a significant role in the history of Iran and Tehran Book Fair perpetuates such historical magnificence. In the meantime, the fair is essentially aimed at encouraging book reading and is held in cooperation of several governmental and non-governmental institutes and organizations.”

“For many years, Tehran Book Fair has provided the opportunity for the readership to buy new books and add to the new sources of Iranian libraries,” he said.

“Asserting that one of the other objectives of holding this event is to strengthen the economy of the publishing industry, he stated: “Last year, the unfair economic sanctions imposed on our country by the United States caused grave problems in terms of providing foreign currency. Fortunately, due to measures taken by the government, the most part of these problems were removed and now we are ready to hold the 32nd edition of Tehran Book Fair.”

“The recent economic problems in the field of publishing industry such as an increase in paper price and others led the ministry of culture and Islamic guidance 2 raise the subsidies and make the books still available to people,” Director of the 32nd TIBF said.


Elsewhere in his remarks, Deputy Culture Minister referred to strengthening international relations and cultural diplomacy which is on the agenda of the fair: “The participation of China as the guest of honor in this year's event proves that culture can confront and nullify imposed sanctions.

Tehran International Book Fair is the principal Iranian book event held annually. The 32nd edition of this event will be held on April 24 to May 4 in the Mosalla of Imam Khomeini in Tehran.