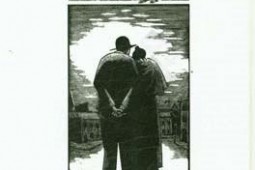 According to IBNA correspondent, ‘Destiny’ which has been released by Elmi va Farhangi Publishing in Tehran, is the only wordless novel by Otto Nückel. It first appeared in 1926 from the Munich-based publisher Delphin-Verlag. In 190 wordless images the story follows an anonymous woman in a German city in the early 20th century whose life of poverty and misfortune drives her to the extreme.

The book follows the woman who is the constant victim of her society—especially the men, such as her drunken, abusive father, and the traveling salesman who gets her pregnant. She is imprisoned for the murder of her unwanted child, and upon release turns to life as a prostitute. The police hunt her down after she murders a man with an axe, and as she jumps from an upper-floor window they shoot her dead.

The book inspired American artist Lynd Ward to tackle the medium, beginning with ‘Gods' Man’ in 1929. Ward's success brought about an American publication of 'Destiny' in 1930 which sold well. The book has impressed critics and has become one of the best-known wordless novels.

The Persian release of ‘Destiny’ has been published in 420 pages.