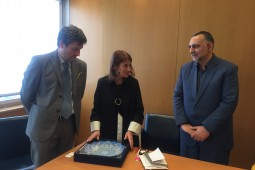 Marco Momoli, Elena Pasoli ‎and Mohsen Javadi
According to IBNA correspondent, on the first day of The 56th Bologna Children's Book Fair (BCBF), Javadi visited the stands of the fair and discussed with Pasoli and Marco Momoli Commercial Director of BCBF.

Accompanied by the Director of Foreign Exhibitions in Iran Cultural Fair Institute Reza No’ei, Javadi stated that holding Bologna book fair is a concrete measure to improve the life of children in future and development of international peace.

“In Iran also the publication of books for children and young adults is in a good situation and we have good Persian translations of great books in this genre from all around the world,” he said.

“However, we need to acquire more experience and participation at Bologna Book Fair which is attended by many International publishers of children's books is a good opportunity in this regard,” Javadi added.

Elsewhere in his remarks, Deputy of Minister of Culture and Islamic Guidance welcomed cooperation with Bologna Book Fair through holding workshops which transfer the experiences of Italian publishers and experts to their Iranian counterparts and get the best results from the opportunities which BCBF may provide for Iranian activists of books for children and young adults.

Pasoli for her part said: “In terms of attention to moral issues in children and young adults books, we held a meeting with the Pope [Francis] and invited 20 countries to attend the program and introduce books on nine moral subjects such as peace, family values as well as social and ethical skills and so on.”